Forgiveness, Part 2:  Take Back Your Power

An episode of a favorite podcast has inspired me to write about forgiveness.  In my first article on the topic, I wrote about the concept of forgiveness between mothers and children.  Here, I wanted to delve into what forgiveness looks like, what it might mean, and how it has looked in my life.

Forgiveness holds many meanings.  Perhaps the most popular understanding of forgiveness is as an act of pardon or mercy, absolving another person of some wrong doing toward you.  The psychologist’s view of forgiveness is ceasing to hold resentments toward another person for perceived harms.  These concepts bring me no peace; I find them both troubling.  Viewed in these ways, forgiveness seems to me like a mixed bag of confusing dynamics centering on power.  To forgive another person implies that you have the power to give or withhold something from them.  It also implies that they want forgiveness from you, otherwise your ability to grant or withhold it would be

meaningless.  People who want forgiveness from you are invested in your approval or opinion of them; they want or need something from you.  So is forgiveness an act of benevolence as it is so often assumed to be, or is it a tool of manipulation?

For many years, these confusing concepts of forgiveness laid over me like a wet blanket.  I couldn’t understand why I had to be the one to offer my offenders a kindness when they had wronged me.  It didn’t matter whether I was considering an estranged family member, a person who had harmed me physically, or a co-worker who behaved inappropriately toward me; the dilemma is the same.  Here is someone whom I believe hurt me in some way and society would have me be the one to let go of it.  That’s a pretty sweet deal for the one who caused the harm, don’t you think?  They get to go about their business being a jerk with your blessing, or at the very least without your lingering resentment.  Viewed in this way, doesn’t the forgiveness concept seem a little creepy and patriarchal?  What’s up with coddling the perpetrator of the harm?

I understand what the psychologists are saying.  They say that resentment is like drinking the poison and waiting for someone else to die, and that forgiveness is a ceasing to hurt yourself.  They say that you are ultimately giving your offender power over you by continuing to harbor resentments.  They say that the offender is likely not thinking about you at all, yet you are expending all this energy being angry.  I get that concept in an abstract way, but functionally it amounts to telling me that, even though the other person was wrong, and 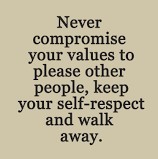 even though I have been hurt, my feelings are invalid and I should get rid of them.  That somehow concerning myself with what the offender is doing is more important than paying attention to my own state of being.  This will make me feel better, they say, to grant a special dispensation to this person who hurt me.  I will be the bigger person, I will have taken the high road, I will be benevolent and compassionate.

Well, I say fuck that.  Here’s the best advice I ever received for dealing with this whole issue of resentment (also, interestingly, from a psychologist):  When you no longer need anything from that person, it will be over for you.  Done.  No more resentment.  No compassion required, no forgiveness needed.  This is down the “the best revenge is living well” road.  If you wanted their approval and they didn’t give it, look for approval elsewhere or, better yet, cultivate some self-approval.  If a family member withheld their love (intentionally or unintentionally) and it hurt you deeply, seek that love you want from other people who are able to give it and, along the way, learn to love yourself.  If a co-worker was inappropriate on the job, stand up for yourself by reporting him and by looking for another job so that, no matter the outcome, you can hold your head high and move on (because who really wants to work in an environment that allows that shit to go on?).  As for the person who harmed you

physically, be kind to yourself and never speak to them or see them again.  In the immortal words of Maya Angelou, “When someone shows you who they are, believe them the first time.”  Put three deadbolts on your door or move or change your name or carry mace or do whatever it is that will allow you to feel safe in your own skin again and never, ever, apologize for surviving.  Never.

You do not owe them a fucking thing.  You do not have to forgive them.  Instead, take back your power.  Be kind to yourself in the ways that others have not been.  Put your needs and your safety first.  Show yourself some love by giving yourself the care and concern that those others have not.  Live.  Live for you.  Yes, it is a wonderful thing to find others with whom we can have mutually loving relationships.  In my corner of the world, such relationships are rare and they are not necessarily enduring.  People come and go from our lives like the seasons, as someone said to me recently.

Healthy relationships don’t start with needing something from the other person, they are based upon mutual respect and admiration.  Even employers and employees should respect one another for what they bring to the table; it is not necessary to humiliate someone just because they perform menial tasks for little pay.  After all, the employer needs someone to perform those tasks just as much as they need their more technical staff and they should appreciate the worker who performs them reliably.  When the dynamic gives one party all the power, it is not a healthy relationship, regardless of context.  A healthy relationship allows room for both parties to state their needs and find ways to get them met, together.

Respect. That’s what we need.  And it starts with respecting ourselves.