Because of my interest in the topic of inequality, I gravitate toward research, articles, art, and media that explore the ways in which we interact with each other based upon our perceived differences.  The latest of these explorations is regarding language and the way it affects our worldview, which has provided me with yet more insight into why we categorize those that do not share our culture or look like us as “different.”

Science has proven that our minor genetic differences – such as skin color, body type,

and eye shape and color – are adaptations developed by our ancestors to their environmental circumstances, which were often tied to geography.  These differences have been diluted by centuries of migration and intermingling across the globe.  If we could once have stated any generalizations about people based upon their appearance, such oversimplifications have been obsolete since before we knew enough to discuss them.  It’s ridiculous to make any assumptions about someone’s ancestry based upon skin color, height, eye color, or any other outward expression of their genetic material, because it literally means nothing in our modern, highly mobile environment.    You have only to participate in Project Implicit to begin to understand how utterly useless visual cues are to knowing anything meaningful about others.

If you want to know something about someone, you will have to ask them.  To ask them, you will have to have a language in common.  Depending upon whether that common language is the first language of one or both of you, the conversation may be quite challenging.  There are words in many languages for which there is no word or phrase in another language that conveys the same meaning.  There may be no words to describe what you are experiencing in another language because the experience itself is literally shaped by your language.

“I have no words,” or simply “no words,” is a popular phrase used on social media these days in the English-speaking west.  While it may sometimes be used simply to avoid conflict, I think it is chiefly used to avoid misunderstanding.  Folks know that, absent 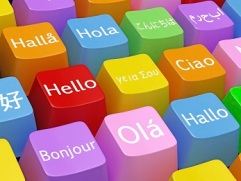 their body language and facial expressions, their words may not properly convey their thoughts and feelings, so they say they have ‘no words’ to avoid confusion.  Social media forces us to adapt our language to its blind and mute digital platform.  Along with text messages, social media communication has given rise to the use of emojis to try to bridge the gap created by not being able to see and hear each other.

The rules of various spoken and written languages likewise present communication challenges requiring adaptation.  For instance, the assigning of gender, such as one must do when speaking Latin-based languages, complicates translations to and from languages that do not assign gender, such as Finnish.  English requires the use of time (tense), where certain languages do not incorporate time but do require directional 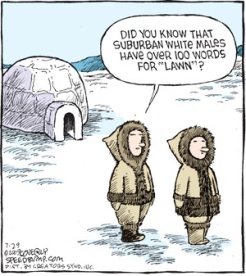 references (north, south, east, west).  So, it isn’t only the lack of words with similar meaning that may be an obstacle between two languages, but they may each possess an orientation and outlook that is literally foreign to the other.

As Shankar Vedantam said in a recent episode of the Hidden Brain podcast, “Languages are not just ways of describing the world, they are ways of seeing the world.” Language shapes your reality by controlling how you categorize the world around you.  The language you speak may have more to do with your worldview than any other single factor.  Those who speak more than one language have a blended worldview and may be more open-minded than mono-linguistic folks merely because their patterns of thinking have been broadened by learning other languages.  They have seen the world through different eyes.

Mono-linguists may have the mistaken belief that their worldview is shared by most others.  For example, if you only speak English, you may think that your view of things is the view of things (read: the correct view of things).  When we encounter this type of limited vision in third-world settings, we think of it as quaint and easily explained by the insular nature of such communities and their lack of access to outside knowledge.  For people in a developed nation with unlimited access to information of all types, a narrow worldview is more troubling than it is charming.  Maintaining a rigid belief system considering the volume of emerging information available to us daily here in the west seems an impossible task that requires a deliberate effort.  How could I continually disregard new data?  I might not ultimately believe it all, nor should I, but I find it impossible not to look at it and consider it – it’s all around me!  The Amish, for instance, have chosen to live without access to digital information and modern conveniences precisely to maintain their established worldview.  But if you live out here in modern, connected America, you have to work at maintaining ignorance of others.  It’s as much a choice as the Amish choice to live separately.

I am a native English speaker.  American English seems very binary to me, pushing me to think in terms of opposites:  black or white, female or male, for or against, rich or poor, good or bad.  My experiences show me that life occurs on a spectrum, that it is not limited to such extremes.  Yet some folks insist upon this binary thinking despite common knowledge, despite scientific evidence, and despite their own experiences.  As Lera Boroditsky, a cognitive scientist from the University of California at San Diego, said in the aforementioned podcast, there is evidence that humans can quickly and easily learn other languages and appreciate the inherent viewpoints thereof “if you just have a reason to want to do it.”

What will it take for more folks to want to do it?